Soil needs Worms.... Did you know?

From the Guardian.com
It’s not just about the bees – earthworms need love, too

If earthworms had feathers, wings or fur, or eyes that looked mournful – or eyes at all – perhaps they would fare better in the public’s affections. This is a clutch of species facing as much pressure from the ecological abuse of their habitats as any other – yet unlike, say, bees (which have their own UN day of celebration today), the decline of worms rarely makes the news. This is a shame. We need to talk more about worms. The health of our earth may depend on it.
Earthworms are not doing very well at the moment. This year, a scientific study found that 42% of fields surveyed by farmers were seriously deficient in earthworms; in some fields they were missing altogether. Particularly hard-hit were deep-burrowing worms, which are valuable in helping soil collect and store rainwater, but were absent from 16% of fields in the study.
The cause of these earthworm declines? The usual. An overstretched environment, creaking at its seams from the demands of modern Homo sapiens. But you may not have heard about the worrying impact on earthworms because … well, this is basically an organism with a mouth and an anus and that’s about it. 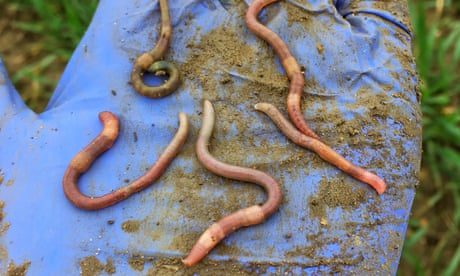 Read more
I would argue that, even with this anatomical simplicity, worms have more charm and charisma than many politicians or Instagroan influencers – and more to offer us. If the needs of earthworms are met, the land becomes, as if by magic, more fertile. Though modern farming practices are contributing to worms’ decline, farmers are, encouragingly, coming to understand that worms are allies, not enemies.
This is one of many reasons why we need to keep flying the flag for worms. Though we share very little with these organisms, we do share a rocky planet that is covered in a sprinkling of soil that they churn up for us, mixing up the nutrients upon which many millions of species depend.
With almost every animal on Earth, we humans like to seek out the common ground, but with the earthworms it is different. They don’t share ground with us. Earthworms provide it.
Labels: Animal health backyard beekeeping Beekeeping botanical gardens Environment Environment and nature Guardian radical permaculture soil health worms
REVIEWS